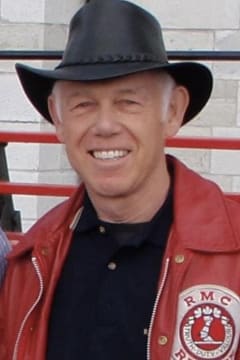 Bill passed away on May 17, 2022, at the age of 74, at Vancouver General Hospital. After experiencing a stroke on May 8th, Bill’s long goodbye allowed for his sons to travel and be at his side with their sister. Bailey and Brody, Bill’s four-legged babies, were also able to have a few final lap visits while in the ICU thanks to the support and compassion offered by the team at VGH ICU ward.

Bill’s spirit of adventure was fostered in his early years. Born in Halifax, Nova Scotia, as a child he lived in Scotland, on Prince Edward Island, and on a farm in rural Ontario. He spent many summers exploring Algonquin Provincial Park with his brother and cousin Ric, and at his grandmother’s cottage at Presqu’ile Point.

Bill graduated from North Hastings District High School in Bancroft, Ontario in 1967. At this time, he was accepted as an officer cadet into the Royal Military College of Canada, class of ‘71, in Kingston, Ontario.

Bill was a very active cadet at RMC, participating in summer training programs within his chosen element, the Royal Canadian Navy. These training sessions involved operations on both the east and west coasts. While at RMC he studied civil engineering, completing thesis work in various concrete mixes and structural concrete forms. He was also the commodore of the RMC competitive sailing team, and he played the bagpipes in the RMC pipes and drum band.

Upon graduating from RMC, Bill received both a commission in the Royal Canadian Navy and an honours degree in civil engineering. During his leave, Bill and a couple of his classmates volunteered to sail on the HMCS Pickle, a 60-foot yawl rigged sailing vessel used for training in the RCN that had been gifted to the RCN by the Royal Navy, and they went on a trans-Atlantic crossing to Germany. Bill later said he would never do that again on such a small vessel!

As a Lieutenant in the RCN, Bill received his first posting to the submarine squadron based in Halifax. As a junior officer he was soon accepted into an exchange program with the Royal Navy and stationed in Portsmouth, England. During this time Bill attended submarine training with both the British and German navies.

After returning to Halifax, Bill left the submarine squadron and was posted to CFB Barriefield in Kingston in 1973. After a couple of years, Bill transferred from the RCN into the Canadian Coast Guard where he spent several years involved in upgrading the navigational aids throughout the St. Lawrence Seaway, the Great Lakes and the Atlantic coast.

Meanwhile, Bill and Maureen were raising a young, active family. Bill’s dedication to family was highlighted in one of many ways by trips with his children to ensure that they knew their extended family. There were many road trips in the ‘Wally Wagon’ to visit grandparents, cousins, aunts and uncles scattered across southern Ontario and Nova Scotia. He shared his love of history with his kids and their cousins, taking them to visit Ottawa’s amazing museums and to explore the campus of his alma mater in Kingston. There were countless family dinners and celebrations, camping trips, and ghost stories told.

Following a lengthy stint with the Coast Guard, Bill transferred to the Federal Department of Transportation. He spent many years as a senior director at the Pearson International Airport in Toronto. Finally, after several years at Pearson, Bill retired from the federal government and put his engineering degree to good use as a consultant on a Vancouver container pier construction project and on a hydro electric dam facility in Trail, British Columbia, the province where he made his new and most recent home.

Bill was the loyal and loving partner of Betty for almost 12 years. Bill and Betty spent many happy days travelling and exploring the world together, including annual stays in Palm Springs with their beloved pups. Bill became an important part of the Hatton-Corcoran family over the years, taking part in many holidays and celebrations, including family trips to Ireland and England. The Hatton-Corcoran family shares fond memories of Bill on special occasions, enjoying a shot or two of his favourite whiskey as he recalled stories of his glory days in the Navy. Bill was loved. He will be dearly missed by Betty, the pups, and all members of the Hatton-Corcoran family.

Bill will be honoured in a beach side Celebration of Life on June 21, 2022, from 3:00-7:00pm. His final resting places will reflect his time on both sides of our country, and his connection to the sea.